Deland Florida is about 20 miles west of Daytona Beach. It has a very active airport, well known as a center of skydiving. In central Florida, the airport is known for having a very productive and supportive relationship with the city, and for this reason it has become a very active light industrial center, while retaining it’s small town airport feel. After several years of planning, they are going to hold the first “Sport Aviation Showcase” there this November 3-5th. If you like sport planes, and particularly if you are a homebuilder, this is a new opportunity not to be missed. 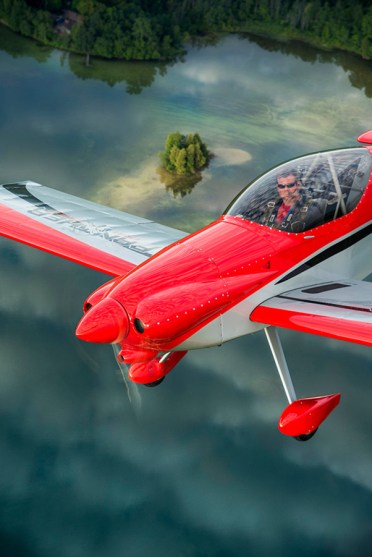 Above, Dan Weseman flying the Corvair powered Panther. Dan and Rachel were one of the first companies to sign on to be at the Sport Aviation Showcase. Their booth is #8 at the event. They will be there with a number of flying Panthers, and they will have all of our Corvair parts, and their own line of Corvair stuff on display. You can read more about it at this link to their site:

What is different about this event? First and foremost, it isn’t an “Airshow.” By its very definition, an airshow is at it’s core a show, which means a spectator event, aimed at entertaining.  The Deland Showcase has a different name, to accurately reflect that it is being held to get more people personally involved in aviation, not as spectators, but as participants, people actually in the Arena of flight.  I have written at great length in stories like this: 2015 Your year in aviation? about making the decision that you will be a participant in aviation, not a spectator. This event is built to directly serve people who’s goal is to be a participant.

The “Showcase” element of the event is getting manufactures to directly interface with builders and pilots. While you can go to an “airshow” and speak with companies, it is very rare that you would be able to see their Sport aircraft fly up close, and the odds of being able to get a demo flight are non-existent, because the airspace at an airshow is monopolized by performers for spectators.  The Deland Showcase corrects this by focusing the event on direct contact between the aviator and the manufacturer. There is no ‘airshow’ so manufacturers will be able to demonstrate their aircraft all day, and supply demos. This isn’t an add on to the event, it’s built in to the DNA, all the way do to having 40′ aisle spacing between manufacturers rows so that their aircraft can quickly be moved to the flight line for demos.

The long term goal is to make Deland the Sport aviation center of the South East.  The city of Deland has set aside a very large tract of land on the airport grounds to build new permanent infrastructure to attract manufactures to move to the airport or operate their regional dealerships from. A number of kit manufactures I know are already speaking of this.  Most airshows are run for profit by companies which have the city as a paid host.  Conversely, the city of Deland is not just the location, but they are the organizer of the event, and their goal isn’t maximum profit, it is to highlight their long term plans to become a very important center of sport aviation.

This is a very rare opertunity to be a part of someing new, to directly serve homebuilders and pilots. When I heard about the concept of the showcase, I immediately understood that this would be a very different event. I went down and met Jana Filip and the team working on the event, and was impressed enough to immediately offer my support as a volunteer. I have been guest speaking to Florida EAA chapters to encourage them to participate in November. I expected the message to be well received, but the response from chapter members has been incredibly positive, with upwards of 90% of the members on hand stating they are planning on being at the Showcase. To me this is a very good indication of the appeal of an aviation event focused on participation. It takes very little explanation to old school aviators before they say “It will be just like the legendary Rockford gatherings in the 1960s.”  or  “This is what was great about Sun n Fun 30 years ago.” If you are a relatively new arrival to sport aviation, The Deland Showcase is your chance to get in on a new event that will certainly be considered among the best events, because it is designed to return to the roots of what made all the previous ‘classic’ events special: Participation.

To directly learn more about the event, read this link to their website: