In my previous story: Thought for the Day: Idiocy on the airwaves. I tested the theory that your mind could remain neutral by subjecting it to equal amounts of NPR and Conservative radio. I found instead they combine to form a particularly strong mental poison. To validate my findings, I again conducted the same test while driving back to Florida.  Please don’t try it, it has the same horrific results headed southbound as it did going northbound. 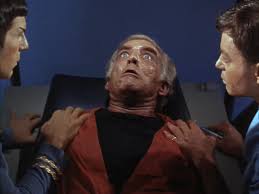 Above, from the original Star Trek, episode “Dagger of the mind” where Dr. Simon Van Gelder has his mind destroyed by the “Neural Neutralizer.” I now understand that this future terror device will simply subject the victim to silmaltainiously listening to NPR and Conservative radio broadcasts. Do not try this on yourself, as Spock nor McCoy will show up to help you.

NPR- They spent a lot of time covering tragic event where an Ohio police officer shot and killed a 12 year old boy who had a “pellet gun”.

The story was repeated numerous times but failed to mention two critical elements: The Officer who shot the boy had previously been determined to be too emotionally unstable for duty by a different department, and the “pellet gun” was actually an Airsoft gun, which are intentionally made to look exactly like specific models of actual guns. Any intelligent writer or producer would understand that any story, even a brief one, should contain these salient facts.

When I was 12, we lived at Quarters ‘C’ Hale Alii drive, about 1/4 mile inside the main gate of Pearl Harbor. I walked through the gate every day on the way to school. My father warned me in the harshest terms, NEVER to goof around in any way near the Marines who guarded the Gate.  While we were there, two people where shot and killed, one an Officer who refused to show ID, and the other was one of the Marines. He bet a fellow Marine he could kick an M-1 carbine out of his hands before he could close the bolt and shoot him. He wasn’t right. My father, who was acting base commander that night, used the event to reiterate to me, in harsh terms, that I must never fool around near the gate, and that not all Marines had perfect judgment. To this day, I am very careful around police officers and other armed people. In an ideal world, it wouldn’t be needed, but we don’t live in that world.

Conservative Radio:  – They covered the story of the Korean and Japanese government’s coming to an agreement about “Comfort Women” They mentioned several times that the Japanese Government is going to pay a total of 8 million dollars to 50 women, over some type of complaint they have that is 70 years old. They made it sound that four dozen 90 year old women are trying to cash in of some government hand out reparation payment.

In reality, what is euphemistically called “Comfort Women” was a Japanese Government program that systematically abducted women from their conquered lands, mostly 15-17 year olds, to be sex slaves servicing the Japanese soldiers in their expanding savage empire. It wasn’t 50 women, there are reliable estimates that it was two hundred thousand women who were abducted in a 20 year period. Also not mentioned, was the fact the program had a 75% fatality rate, and that the Japanese government has spent 70 years systematically lying and denying that any program existed at all. They used women as young as 12; on average, the slaves were raped more than 10,000 times, and then considered worn out, they were ‘disposed of on location’ (bullet to the back of the head, dumped in a ditch.) Many people consider this the largest single crime committed against women in history. If you think I am making it up, read this: https://en.wikipedia.org/wiki/Comfort_women. I spent my childhood in Thailand, there Japanese tourists were detested, because this crime had affected countless families just 30 years earlier.

As horrific as the Holocaust was, everyone understands that the Germans of today, make absolutely no attempt to cover it up. The ‘own it’ and take responsibility for it. Today only a tiny group of people in the world are “Holocaust deniers”, and those people are considered sick. Conversely, the entire nation of Japan, it’s people and government, have engaged in an absolute denial of the holocaust they inflicted on Asia in WWII. I am not just speaking of sex slaves, but of the millions of civilians they intentionally killed. To this day in Japan, serious death threats are made against any individual who dares to criticize anything about the nations behavior from 1931-45.  For this exact reason I have never owned a Japanese car. I have friends who own Toyota Prius cars, and they often state the made the purchase they believe it shows people they care about the environment. It might, but it also shows me that they either don’t read enough, or they are just fine with holocaust deniers, as long as the holocaust only involved Asians not Europeans.

Your Aviation Connection: Between TV and Radio, the average adult American male consumes more than 2 hours of programing per day, about 800 hours per year. If the exact same person made the willful decision to put that 800 hours into something productive, such as the construction of the homebuilt aircraft in their garage, they would make some real progress. As a side benefit, they would be a lot less negative and pessimistic, since the real goal of almost all “news” is to get the public to blindly mood swing between abject fear (Ebola, ISIL, Sharks, tornados, etc.) and righteous indignation at anything the other team (party) is supposedly doing. It is a hamster wheel that many people spend a life time running on, righteously indignant at the poo on their paws, not making the connection that it is the same substance that came out from beneath their own tail on a previous revolution, when they were told to be afraid and run faster.

12 Replies to “NPR vs Conservative radio, a journalism-free contest”