“If a man, holding a belief which he was taught in childhood or persuaded of afterwards, keeps down and pushes away any doubts which arise about it in his mind, purposely avoids the reading of books and the company of men that call into question or discuss it, and regards as impious those questions which cannot easily be asked without disturbing it–the life of that man is one long sin against mankind.”

Homebuilding, at the very core of the actual experience is learning. People often mistake assembling a plane as the experience, but that can be done without learning much, and without learning, a builder has only traded his hours and money for a plane he could have just bought. Thus, the learning defines the value of the experience.

My business is teaching a set of specific skills, and a general philosophy to homebuilders. In a given year, about 1/4 of my time is wasted, because, no matter how I champion learning, we still get a significant number of people who just want to get their aircraft assembled, while learning as little as possible.  My goal is to share what I know, and theirs is to simply have something, there is little common ground there.

Clifford’s quote above is an excellent tool for sorting those who wish to learn from those that merely want to keep every old wives tale and half truth they were ever told about planes intact, because they think this will require less effort and thinking.  Clifford was speaking about serious topics like philosophy, science and theology, but I uphold that flight is a serious subject also, and people who don’t wish to learn would be safer leaving planes alone.

Without fail, when you encounter a person who’s life is a continuous series of new things learned, new perspectives considered, evolved thinking, you have met someone alive and well worth knowing. Conversely, the people you meet who are ever more attached to something they heard and long ago and adopted dogmatically, to the point that they will cling to it in the face of all evidence to the contrary, are not going to be people who enrich your life with their presence.

I communicate with many people in a year, of these, I know many. A much smaller number I know as friends, and inside this is a still smaller circle of very unique individuals. Perhaps the only thing they have in common is the older they get, the more likely they are to Wonder, to Ask, to Question and  to Consider. They have more information and ideas than they did in years past, but the search has taught them all to distrust the packaged and provided answers the lazy and tired accept as ‘truth.’ One life is an ever richer journey, while many others simply settle for an easily reached, but dull destination. My personal definition of being an aviator is to travel, not in the geographic sense, but from who you were before to who you are today, to who you will be tomorrow. Clifford’s quote describes the sin of these three places having no space between them.

There are many greats in aviation, and homebuilding has it’s share, but there was only one life that stands out “like mars at perihelion.”  This is Steve Wittman, greatest air racer who ever lived, builder and designer, pilot of incredible talent. He relentlessly evolved for 70 years in aviation.

When I was 31 years old, he took me flying in the Olds-Tailwind, N37SW. He wrung the plane out for 25 minutes in a display of skill that I was hard pressed just to fathom. Wittman was 91 years old. Afterward, he took me in the hangar and showed me some new ideas he was incorporating into a brand new set of Tailwind wings he was in the process of building. 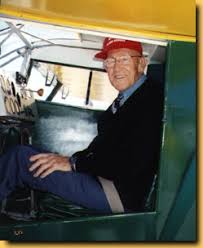 Above, Steve Wittman in his “Buttercup”. He built the plane in 1937. Through out his life he changed many things on the plane, the gear, the engine, the span, the wing tips, adding leading edge devices, making the tail cantilever, etc. Although he was a brilliant designer, and won 375 air races in planes he designed and built, he never rested on his laurels. He was deaf to praise and past glory when there was anything new to try or learn.

2 Replies to “Thought for the day: Challenge of an open mind”